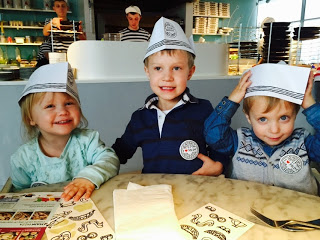 When you’re having a baby choosing an appropriate name is often a daunting task. It’s such a huge responsibility and it’s so important to get it right. After all you don’t want to be bored of your child’s name after a few months!

When I was pregnant with Oscar, Simon and I had the usual chats about names. However, I don’t remember it being that difficult. We didn’t know we were having a boy, so had to have a name for a boy and a name for a girl prepared. I know some people decide when their baby is born, but I’m too much of a planner to do this, so names were decided well in advance!

We both like quite traditional names. For a boy I really liked Harry. However, Simon wasn’t a fan as he thought it was too popular at the time! We eventually decided on Oscar. Simon’s Grandad was called Oswald, so it was quite a nice fit. For some reason I can’t for life of me remember what name we had picked out for a girl – must be baby brain!

When I was pregnant with the twins, I remember us having lots of different conversations about names. Again we didn’t know what we were having, so we had to have two boys names and two girls names ready! This time we used name books and online tools to provide us with inspiration and it seemed to take us ages to make a decision.

After months of discussion, we eventually decided on Heidi and Phoebe for our two girls names and Henry and George for our two boys names. We also had to decide which of each two we’d choose if we had a boy and a girl (so many decisions!). We decided to go with Heidi and Henry, due to them both starting with H. Henry was also my Grandad’s middle name, so again a nice sentimental touch.

One tool that I’ve come across since having the twins is the Name Generator  on Emma’s Diary which provides lots of inspiration. Many of the names are quite unusual, which gives you something new to consider. On the site they also have the Baby Name Trends tool  which allows you to see how the popularity of names have changed overtime. This is great if, like us, you don’t want to pick a name that everyone else seems to be choosing. The site also has a fun facts sections, which features info on seasonal trends (apparently some names appear to be more popular during certain months!) and hyphenated names. It’s certainly worth having a look if your making that super important decision about what to call your precious baby.

I’d love to hear how you decided on the names for your child/children.

Please note: I was approached by Emma’s Diary to trial the tools on their site. However, all views are my own.