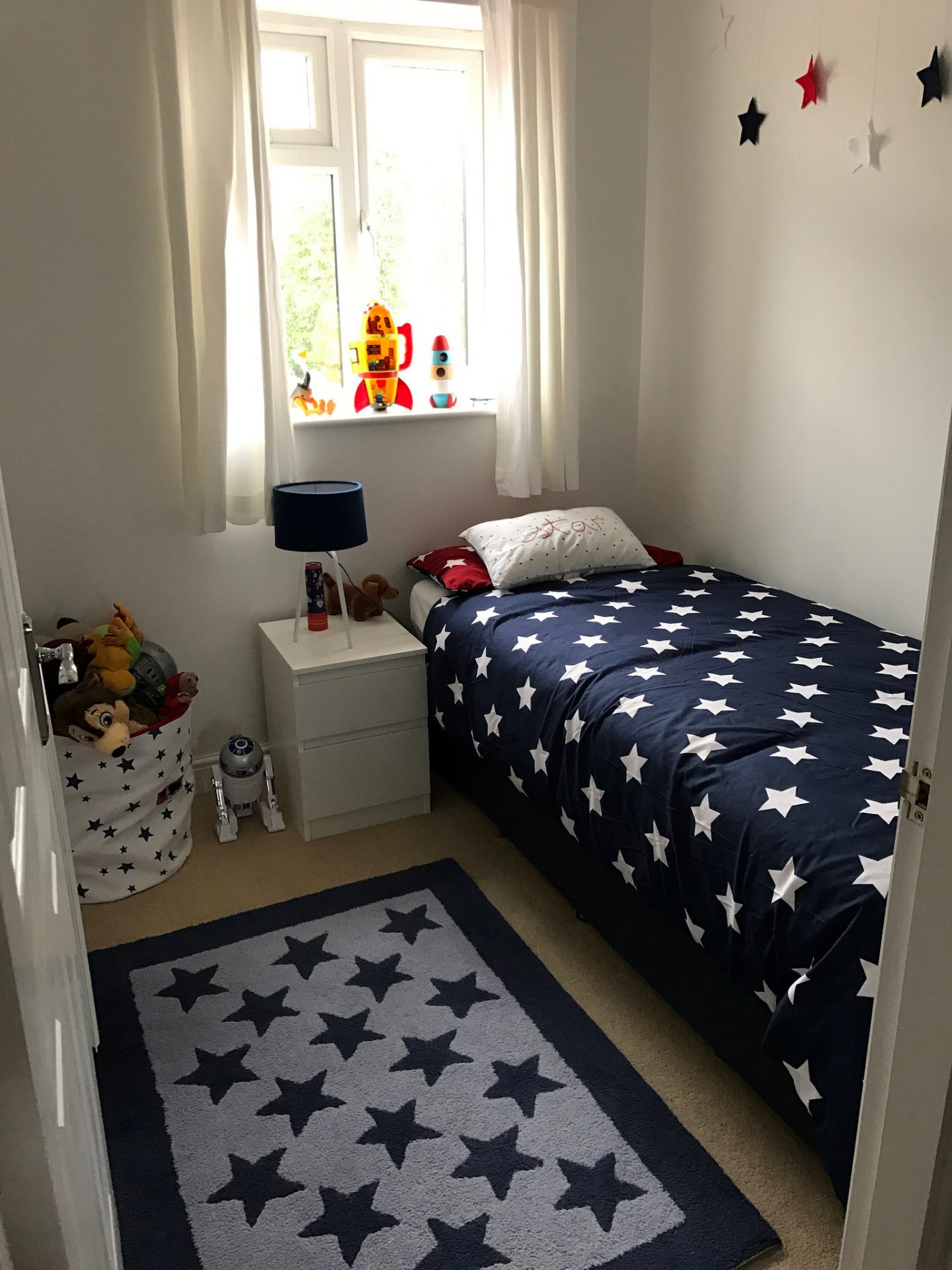 Back in January, we made the big move to put the twins in seperate bedrooms. We were finding that one would often wake the other one up and we just knew that it was the right time.

Henry had said that he wanted a space themed bedroom after he saw some bedding he liked when we were out shopping, so I set about creating him his own special room.

The room was part of the extension we had a couple of years ago, so was basically a blank canvas. The walls were already painted white and we’d chosen a neutral carpet so that it would work with any colour scheme.

As the room is small we decided to keep the white walls and add colour with the bedding and accessories. I’m really glad that we decided to do this as it always feels nice and bright in there.

I decided to go with white curtains to again try and make the room feel as large as possible. We also chose a small single divan bed and a small wardrobe and bedside table from Ikea. The proportions work really well in the room and it doesn’t feel overcrowded. 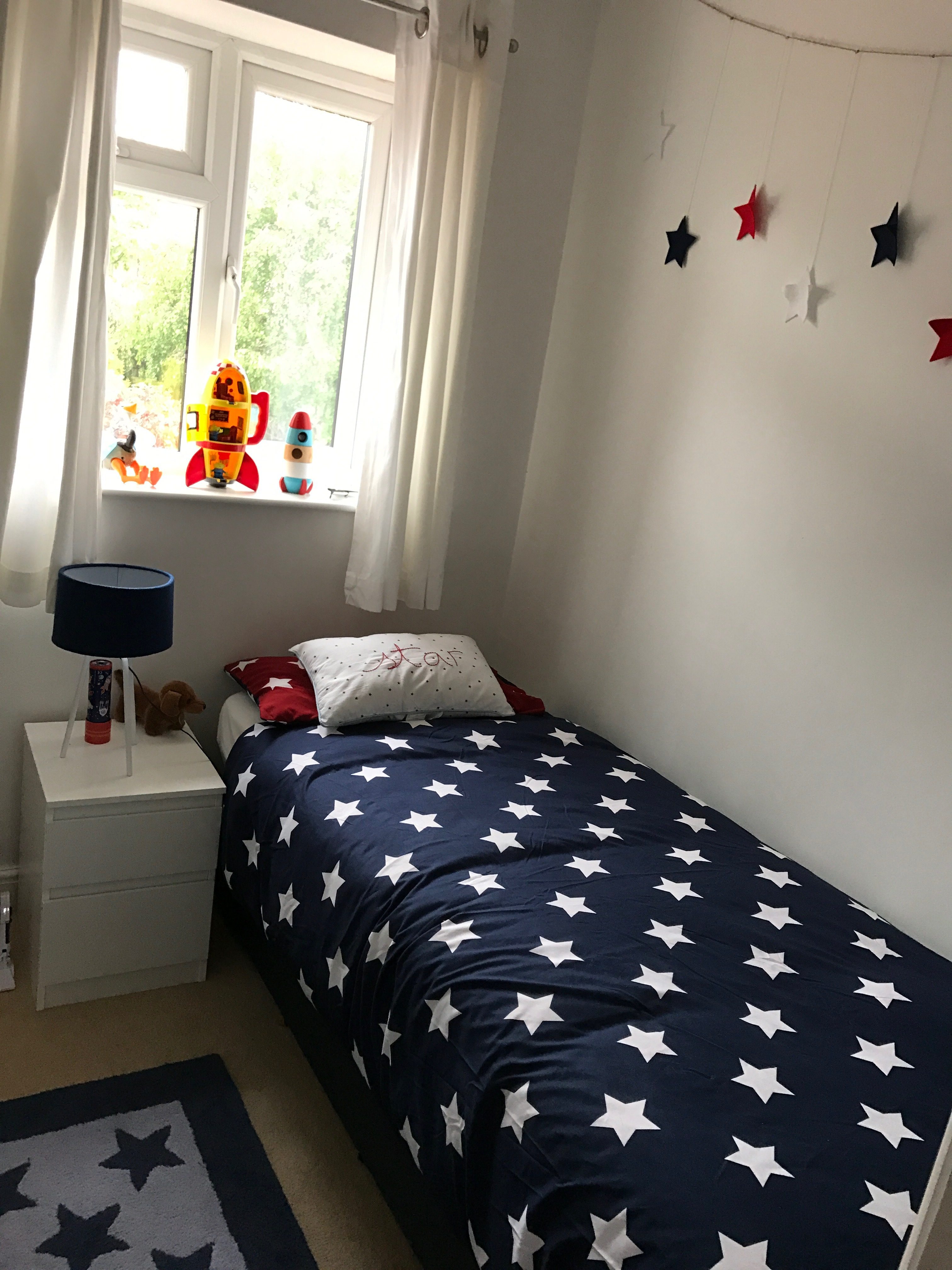 To add some colour I chose dark blue and red star bedding from Matalan, which I really love. It looks far more expensive than it was. I also borrowed (ok, stole) a rug, which my Mum had at her house, which was from Laura Ashley a few years ago. I think the rug really helps to bring some colour into the room. I chose a blue bedside lamp from Next and added blue doors to the Ikea Stuva unit. I’m actually really pleased with the balance of colours. 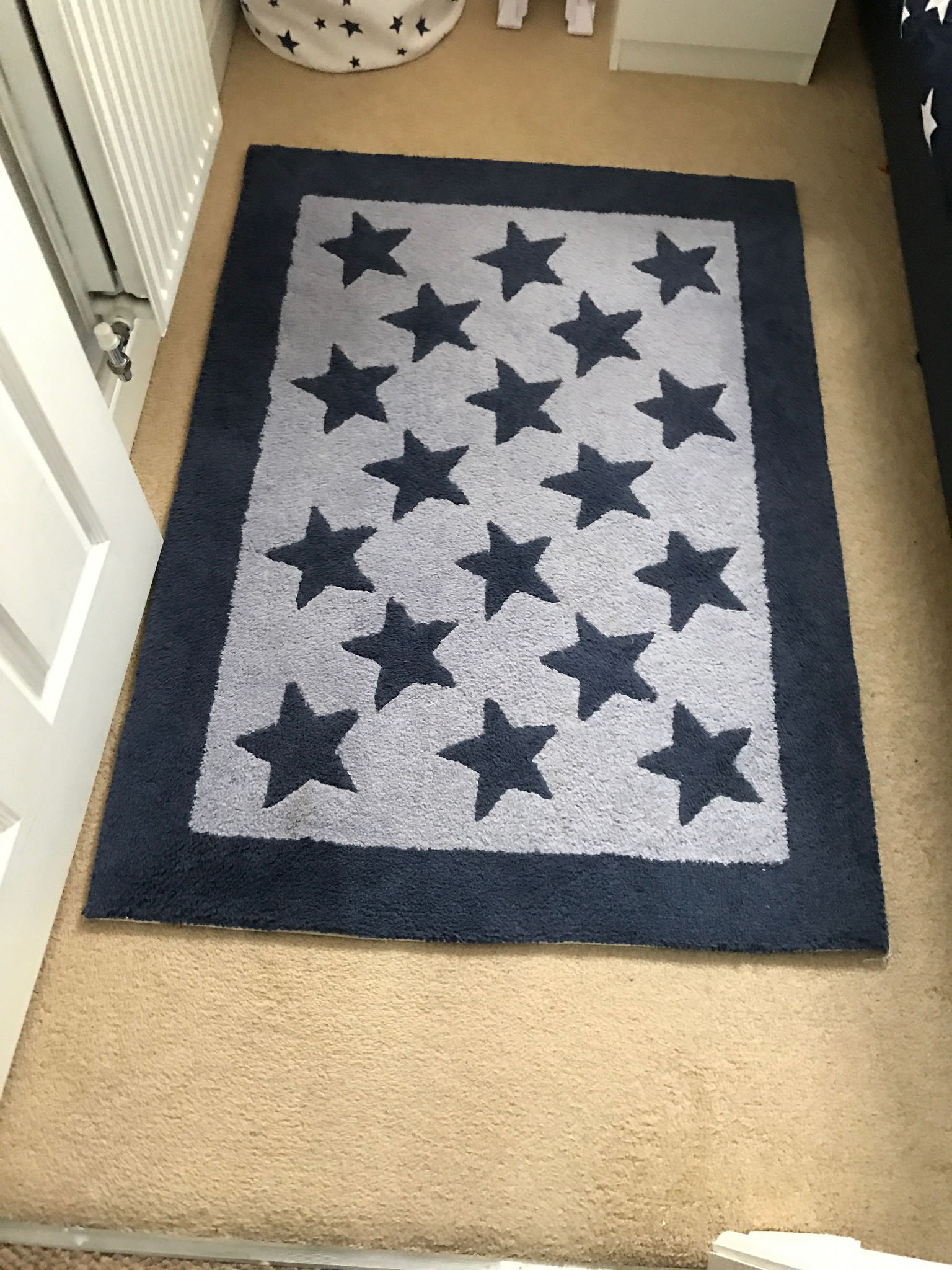 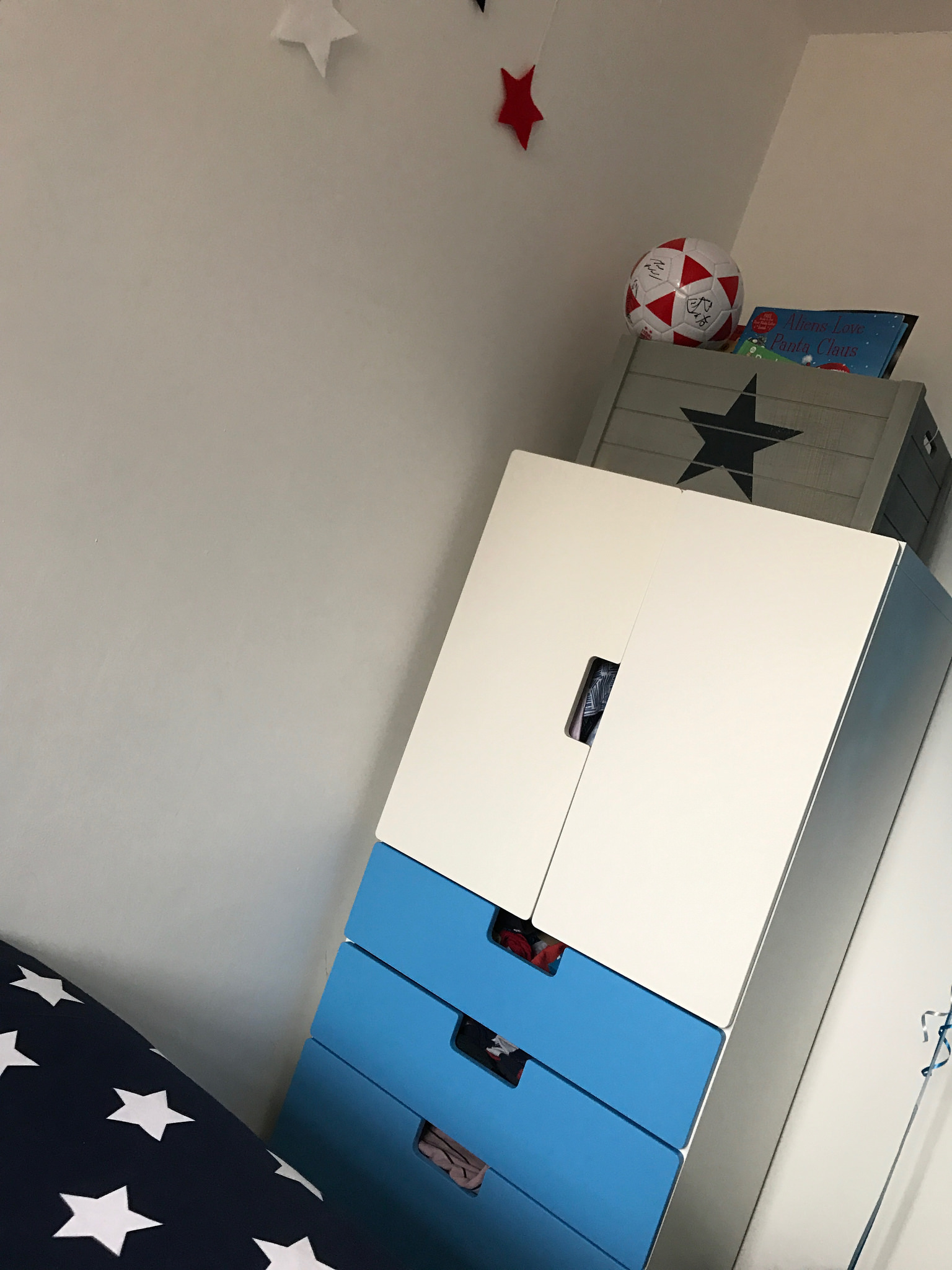 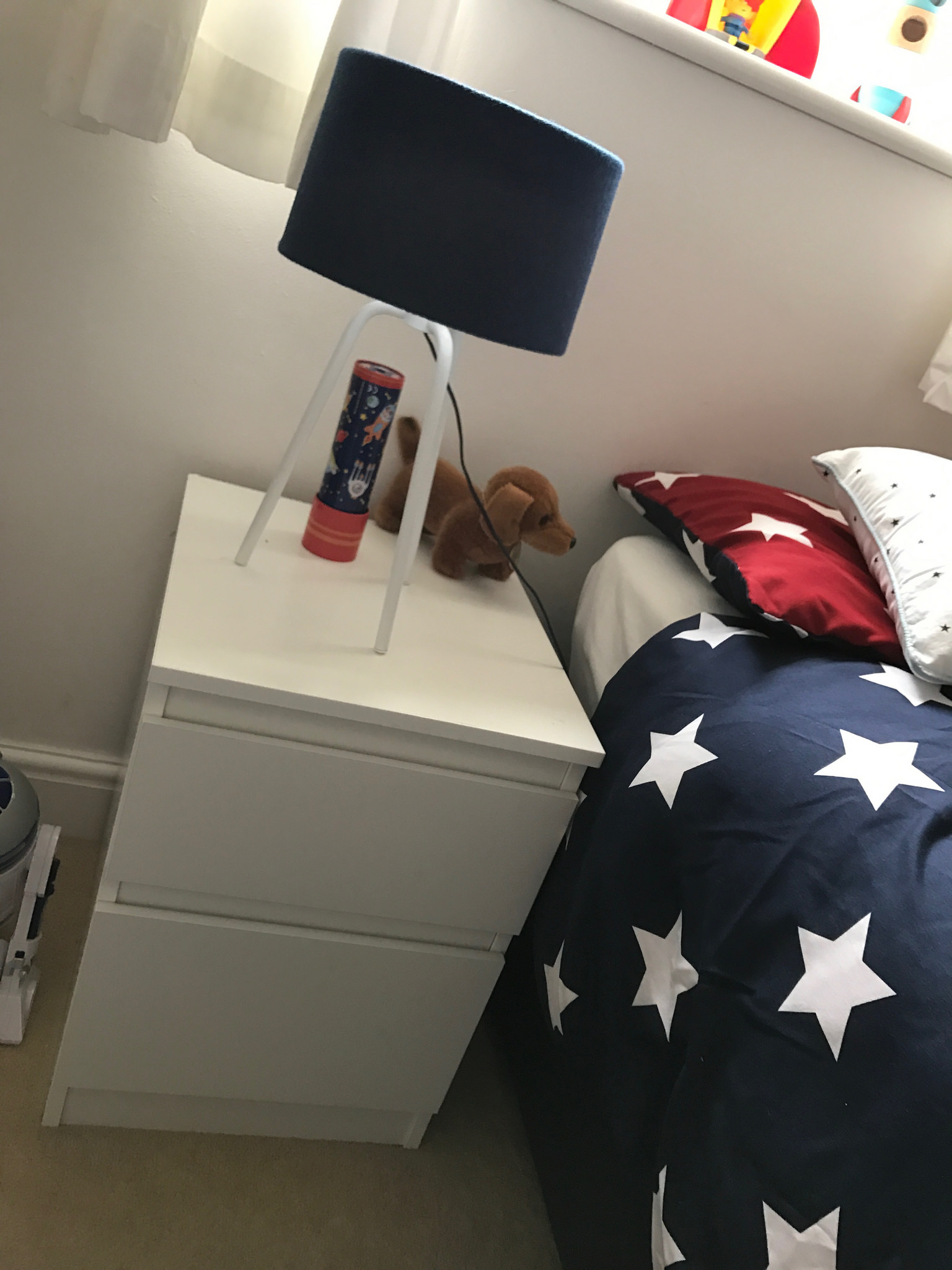 I then added some other bits in the room to compliment the space/star theme include a storage tub and little ‘Star’ pillow from The White Company. These were both in the sale around Christmas time, so a bit of a bargain. I absolutely love The White Company, but it is on the expensive side. 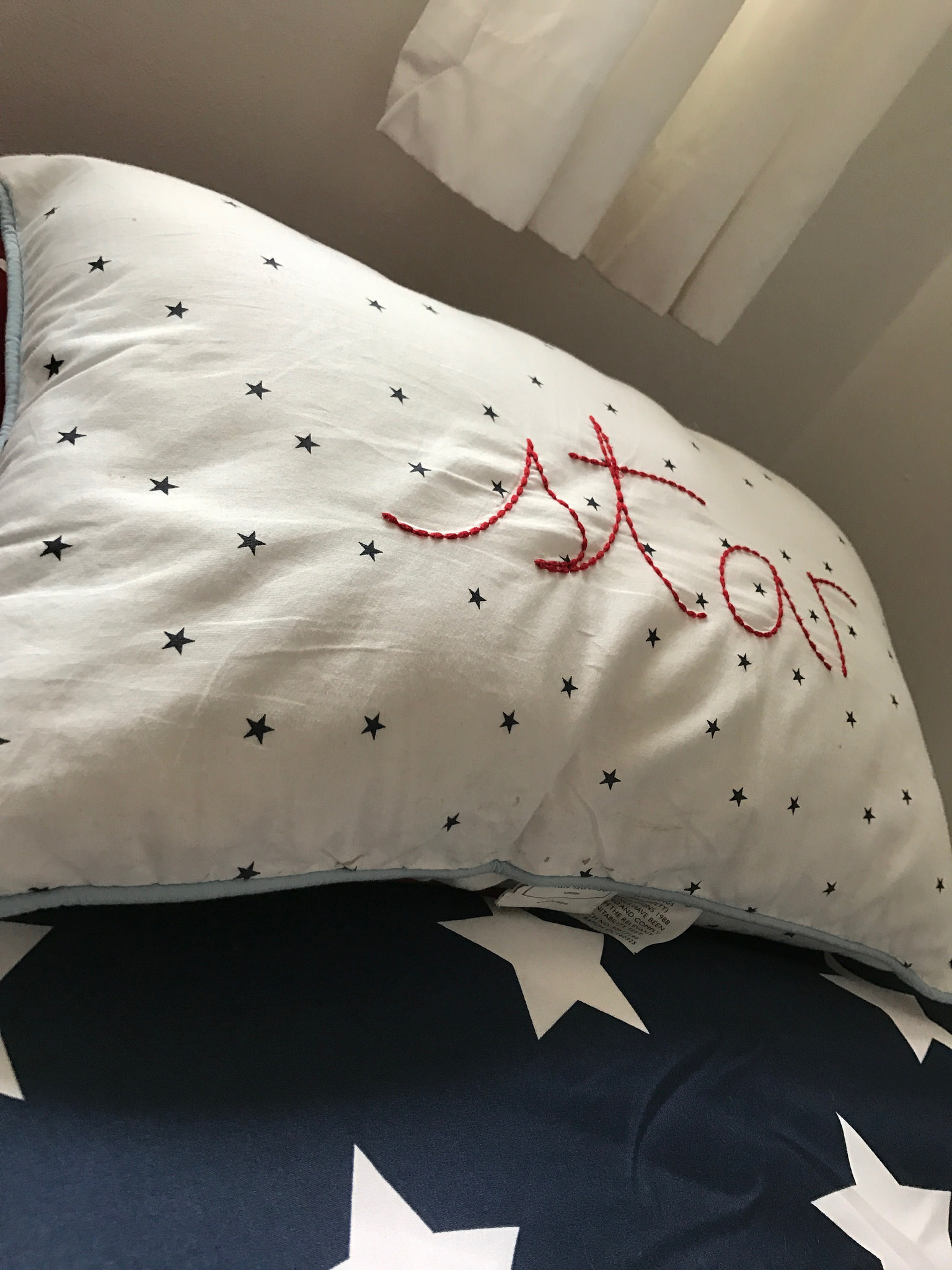 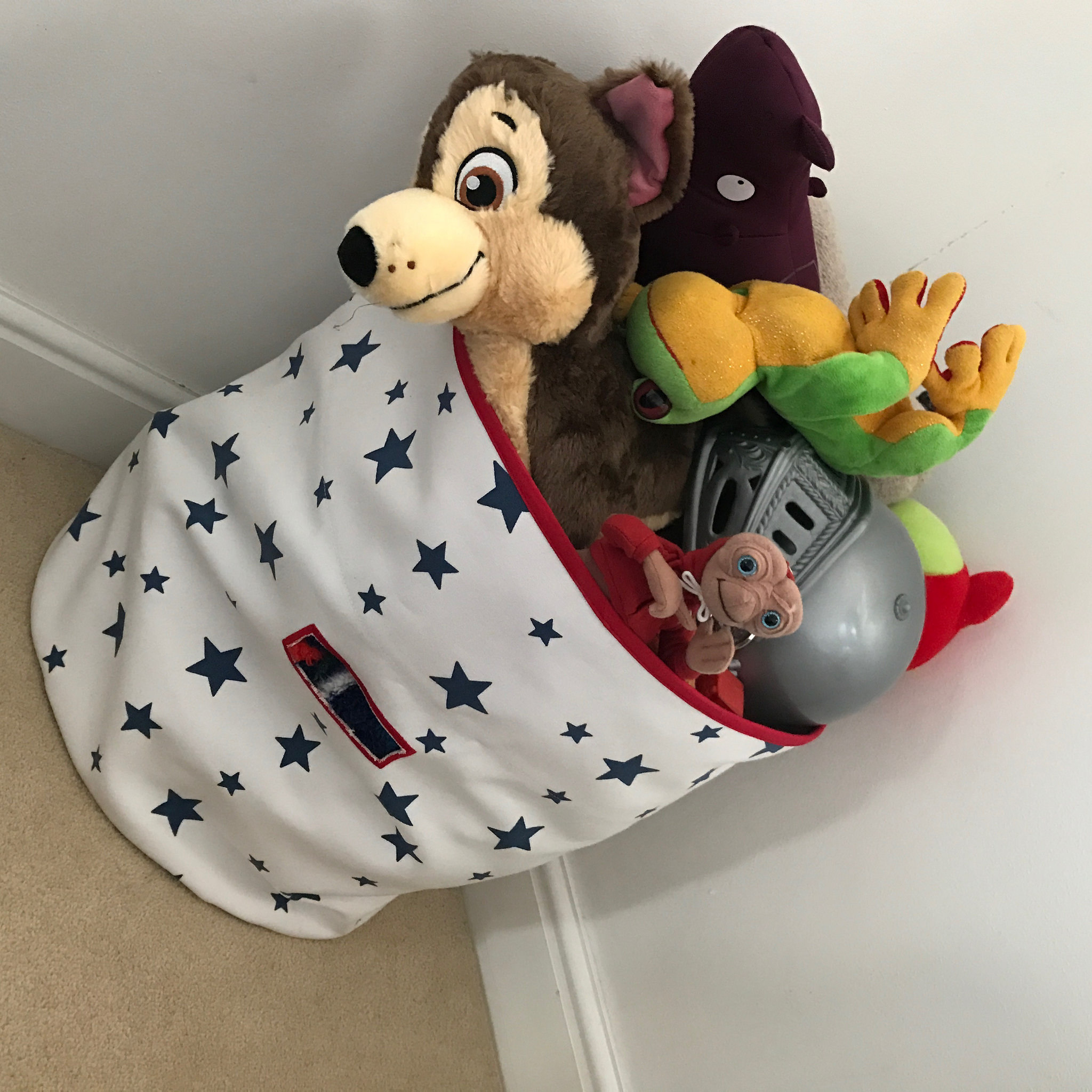 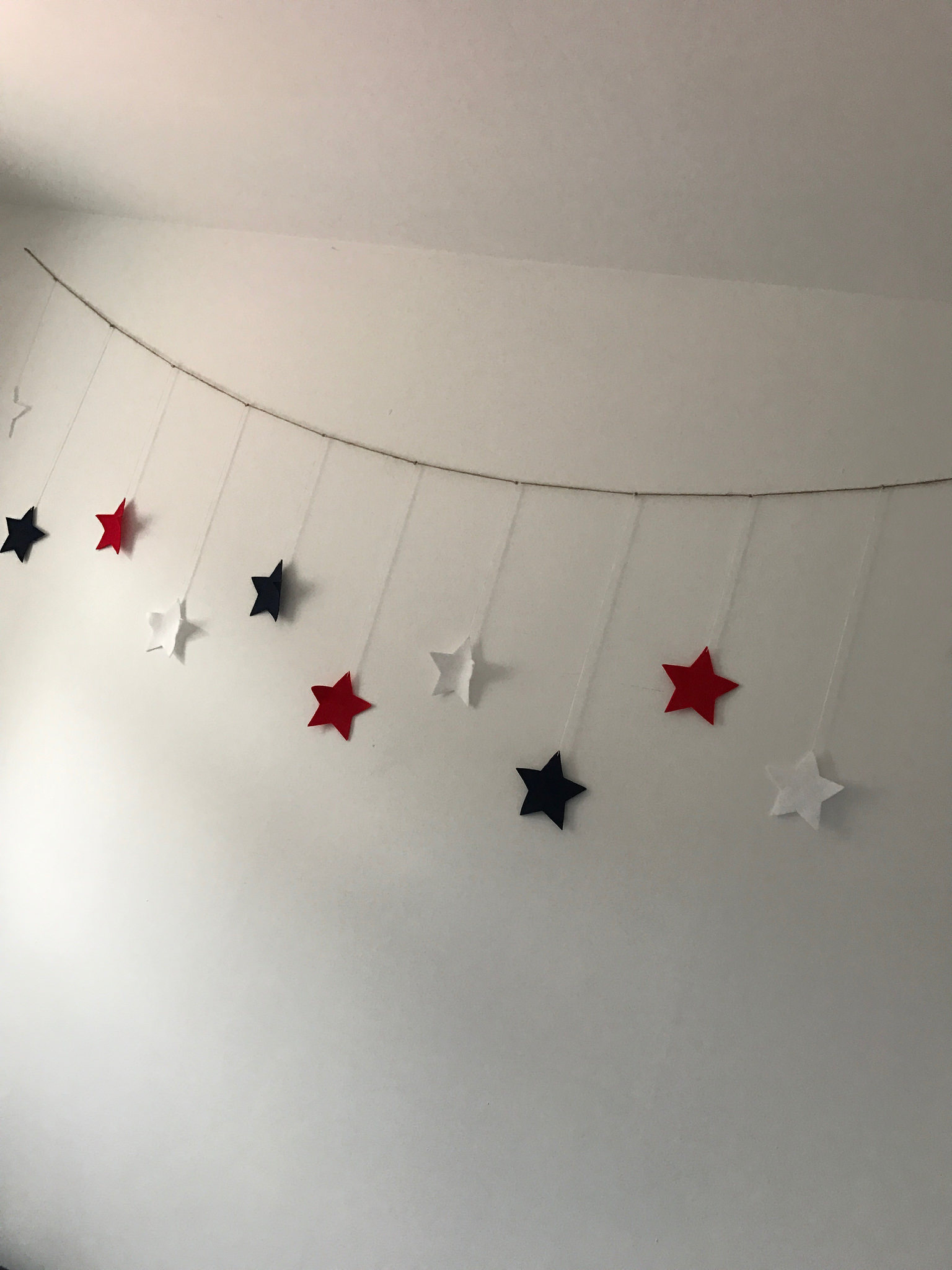 The print on the wall is one that I made myself on Canva, which I then framed in a Ribba frame from Ikea. You can get similar ones from Not on the High Street. Henry loves having his name on the wall. 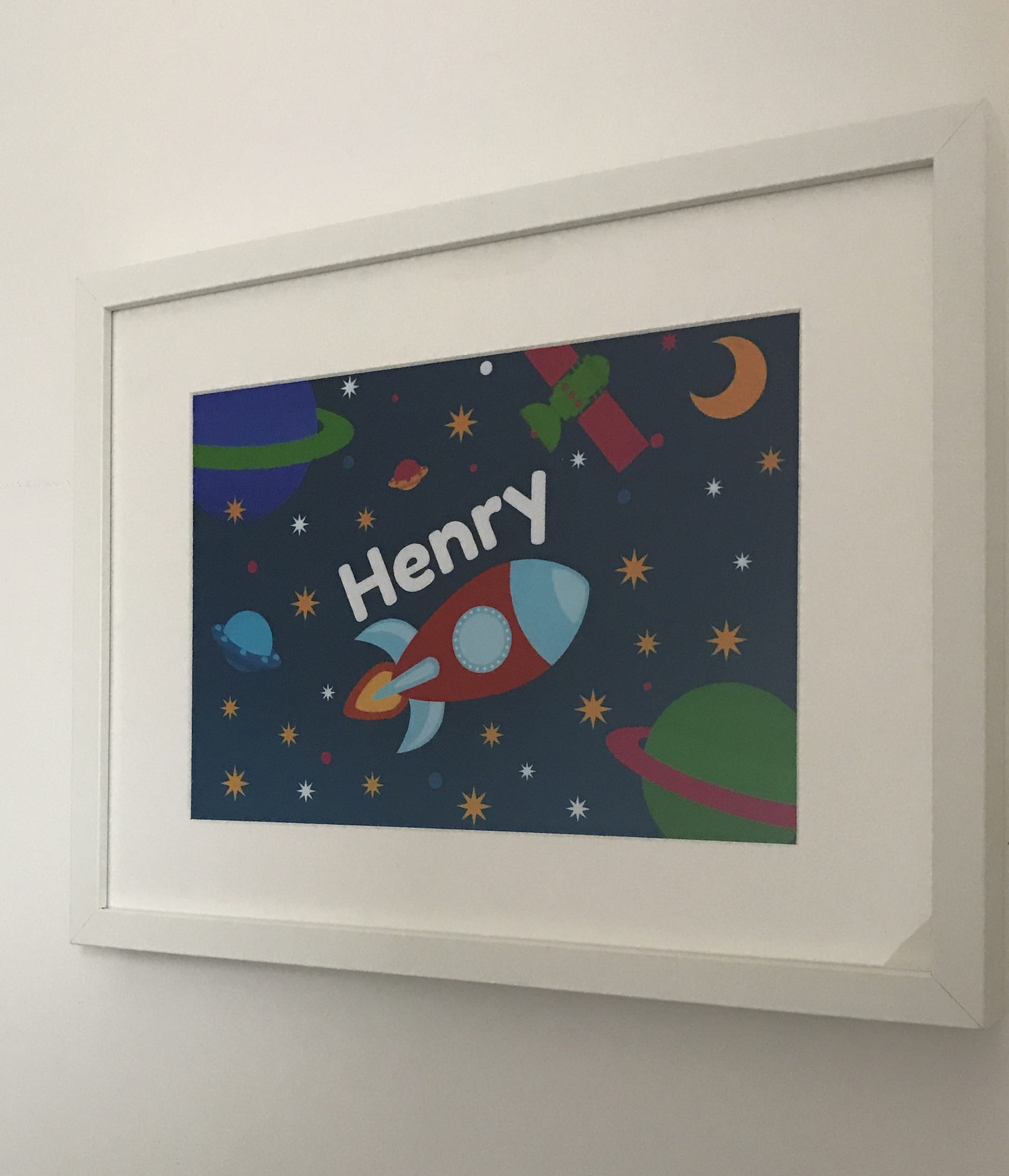 The wall garland is from eBay and was really cheap. I think it goes perfectly with the bedding and the rug. The storage box was from TK Maxx. I love this as it’s great for putting books and bits in to keep the room nice and tidy. 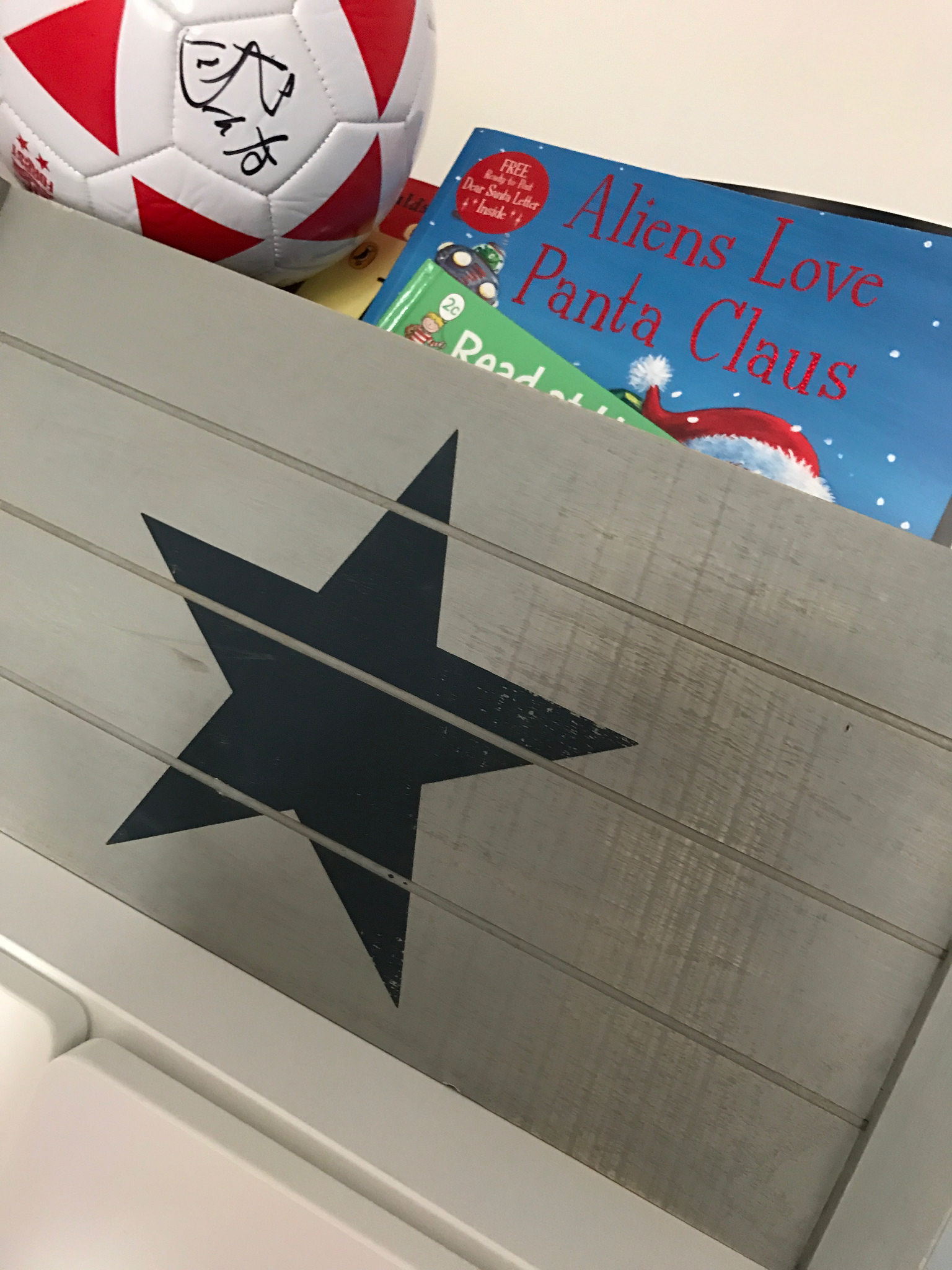 We also added some of Henry’s existing toys to the window sill as they fitted the theme so well.

I’m really pleased with the room and Henry loves it. We’ve been really surprised by how easy he’s adjusted to being in his own room. Although he does try and sleep in Oscar’s been quite often, I think that’s because they get on so well. Heidi wasn’t quite as impressed with the change and it took her a few nights to adjust. She’s fine now though and excited about getting her room made into a girly room!